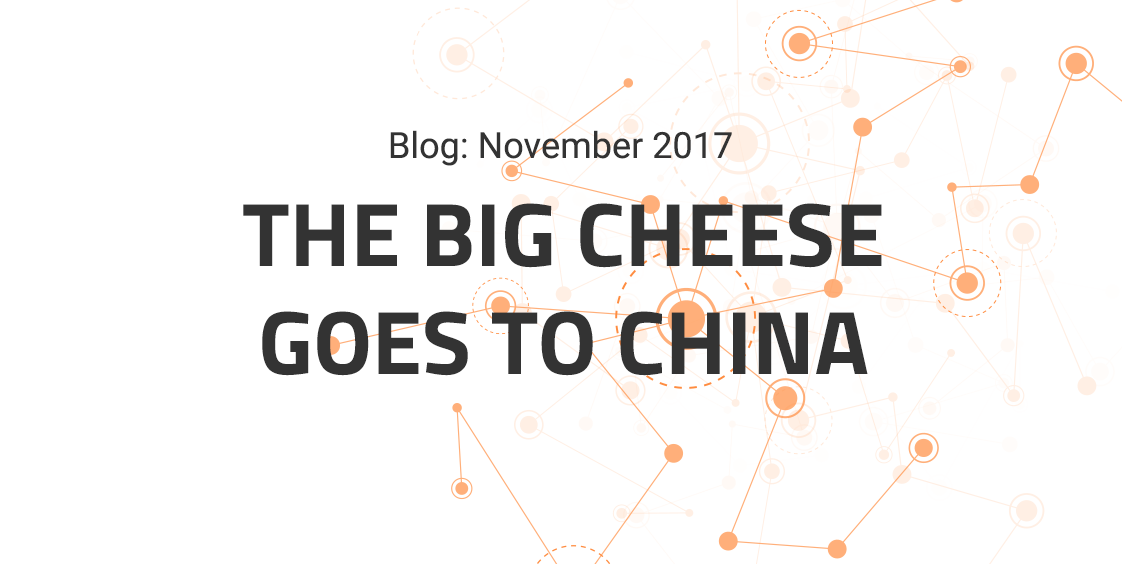 The Big Cheese goes to China

I remember my first speaking opportunity back in 2007 on the stage of DSE East in Philadelphia. Yes you read that right, DSE East… anyone remember those days?

Since then I have been invited to speak at numerous digital signage & experience design conferences around the world. It is humbling to be asked to travel to different countries to share your thoughts and experience a variety of cultures first hand. OpenEye as an agency has had global roots since we started in 2001. From New Zealand to Russia and U.A.E to Brazil we explored, we spoke and we learned lessons from our experiences there.

We don’t use the word “Global” without having the miles to back it up!

This is especially true with my latest trip to China (which was a first for me) this past November. There on behalf of my presidency with SEGD, I was an ambassador of design and got the opportunity to check out so many cool places and meet some amazing people.

With so many inspiring moments on the trip, the ones to follow are a few that stand out for me. If you ever have the chance to visit China I do recommend it and take the time to explore!

The 2017 Industrial Design and Branding Symposium held in Chengdu focused on the theme of “Innovation Integrity”, and explored three areas including “Sichuan Innovation Future” “Focus on Multi-angle Innovation” and “Inclusive Thinking.” Having only a basic understanding of industrial design I tried to absorb as much information as I could prior to presenting. I do find it interesting that the Chinese are trying to change the world’s perception of themselves by using design as that driving force. It’s the younger generation of designers that are attempting to make the point that China is not just a country for manufacturing but a country that leads in design innovation.

Though the symposium had a focus on Industrial Design it did also touch upon Environmental Branding. I was primarily invited to speak on behalf of SEGD, talking about the community and its impact on educating designers as well as showing them the types of branding projects other members of the community had executed. In addition to SEGD I also spoke about digital engagement, referencing several of OpenEye’s projects and how digital should also been viewed as an element of branding.

One of the highlights of the symposium was being approached by a group of young designers after my presentation. It’s great to see the growing emphasis on design in China and their passion in absorbing as much information as they can expose themselves to. Of course there were the language challenges but through my interpreter I was able to give them some advice as to where I see digital progressing in terms of environmental branding.

One of the things I most enjoy about conferences is meeting new colleagues. There were a group of western designers I was fortunate to spend time with, each having a different perspective on branding. It was very interesting to hear their stories as a majority of them relocated to China specifically help create awareness for design. A couple of standouts from the group:

I travel to a lot of countries with OpenEye so hence the word “Global.” One of the things I love most about our culture is how the experiences we have shape our vision. We have never been a group with blinders on or just satisfied exploring within the boundaries of the states. Being on the Great Wall was one of those moments where you had to pause and take in the moment. Strangely on the way up to the wall you do pass through a “shopping area” where you will find various vendors selling souvenirs and of course a Burger King and a Subway. Still I was in awe of the structure and the breathtaking views.

Design is a Universal Language (Beijing)

I was fortunate to have the opportunity to host an evening roundtable discussion with a group of designers in Beijing. The focus of the conservation was digital engagement and its impact on environmental branding. This is still a relatively new area of discussion within China and the examples I showed (both from SEGD and OpenEye) helped to spark a healthy debate on where design is heading. Given the language barrier (and quite thankful for my translator) I was able to pick up on their passion for design innovation and interest in competing with the US.

Rising 632 meters into the sky the Shanghai Tower has become the pinnacle sky-rise amongst the Shanghai Skyline. Designed by Gensler and completed in the Summer of 2015 it is an amazing structure. Like many cities in China, Shanghai’s rapid growth has meant a boon in contemporary architecture styles. The city is decorated with many beautiful buildings such as the Museum of Glass and the Jin Mao Tower.

About an hour away from the Great Wall are the Ming Tombs. The tombs are the final resting place for thirteen of the sixteen emperors of the Ming dynasty. With in each tomb is a collection of relics belonging to the emperors. Decorative and richly eclectic art lines most rooms within the temples. Given some of these pieces date back to as early as the 1400’s it’s impressive to see the quality and detail that went into each piece.

Always time for a beer (or two) / Beijing

Yes it’s true, from time to time I like the occasional beer! Surprised? Who would have thought China would have a decent craft beer culture? I found this great gem called Great Leap Brewing at the end of a dark alley in Beijing. You have to love the naming of their beers especially thier General IPA’s named after a series of famous military personnel, both those sanctioned by formal governments and warlord states alike. Turns out they have a couple of locations in Beijing but my recommendation would be the one on Di’Anmen wai Avenue in the Dongcheng District.

Go with the Explorer General IPA if they have it on tap!